At the Kiyohara Industrial Park in Utsunomiya City, TGES constructed a smart energy center in which 30MW class CHP and boiler were installed as to provide energy services to 3 companies and 7 offices in the park. This is Japan’s first “integrated energy-saving business serving multiple plants” to supply electricity and heat to multiple businesses of different sectors in an inland-type industrial park. 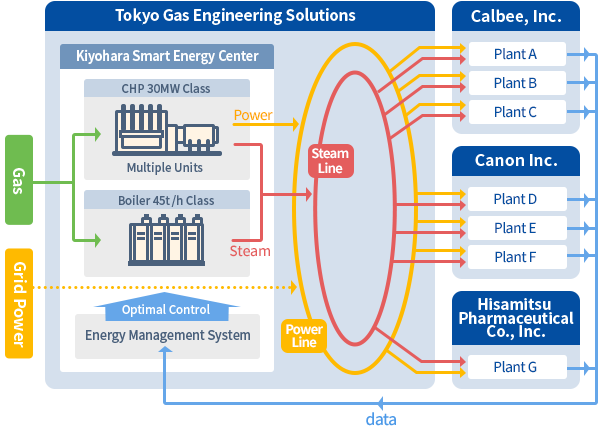 This epoch-making projects realizes energy and cost savings, enhancement of the district's disaster resilience and empowerment of electricity generation self-sufficiency. Due to adoption of a large-scale CGS and an energy management system, approximately 20% in energy saving and reduction in CO2 emissions are projected. TGES monitors the fluctuating load of each office and engages in optimally balanced operation to supply energy throughout the district using FEMS*. This makes it possible to optimally control heat sources and visually track energy usage, thereby contributing to greater environmental awareness among building users.
*FEMS(Factory Energy Management System) provides the optimization of energy supply and consumption to reduce CO2 emission and factory operation costs

The World’s Largest District Heating and Cooling Center in the World.

Shinjuku Shin-toshin District Heating and Cooling Center was constructed in 1971 for serving almost all heat and cool supply in the Shinjuku area. In1991 the heating and cooling facilities were transferred to this place according to the increasing energy demand of Tokyo metropolitan government, which moved to Shinjuku. This center with cooling capacity of 65,000RT, is one of the world’s largest system of its kind, serving more than 20 skyscrapers in the Shinjuku area. The system uses natural gas and newest technology such as cogeneration, thus helping to protect the urban environment and reduce energy consumption. 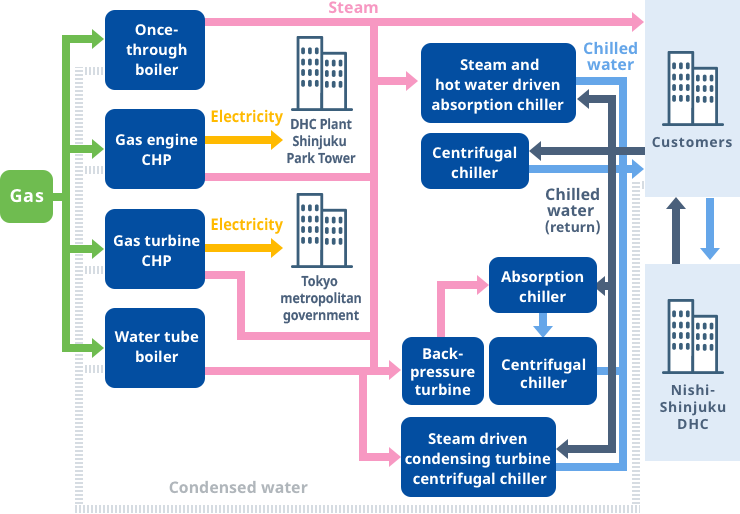 TGES has been contributing to promote disaster prevention community planning and decarbonization of the Shinjuku area. Based on concepts of best operation efficiency, two adjacent DHC (Shinjuku shin-toshin and Nishi-Shinjuku DHC) started to share the heat since 2013 via newly installed underground pipelines, which results in 3000t per year CO2 reduction and further cost savings in the area. Shinjuku DHC, providing Tokyo Metropolitan Government with not only heat and cooling but also electricity which can be supplied even during the power outage, helps enhancement of the reliability of energy network in the Shinjuku area. 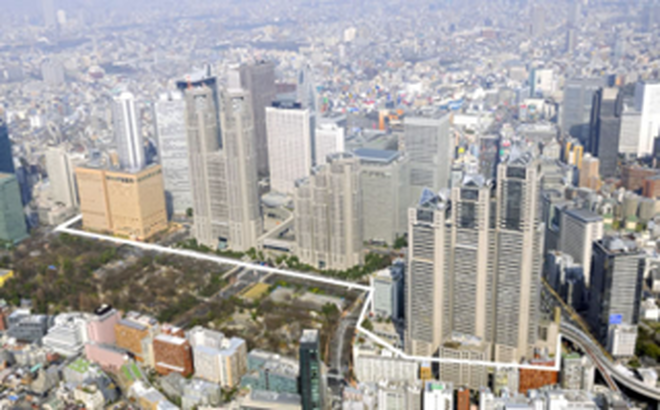 The Makuhari District Heating and Cooling Center was launched in 1989 as an energy production facility for “Makuhari New City ”, a concept that aimed to make this area a futuristic international business city. Heat for district heating and cooling is supplied to the 61.6ha of the international business area of Makuhari New City, creating a comfortable environment for the “Makuhari Messe” convention center as well as hotels, office buildings, and other facilities. Using clean energy, natural gas as fuel, the district heating and cooling provided by TGES preserves the area’s environment and is an energy supply system that is friendly to both people and the Earth. The Makuhari District Heating and Cooling Center contributes to the local community as an urban infrastructure supporting Makuhari New City and the global environment.

Compared to conventional district heating and cooling systems*, the Makuhari DHC Center has achieved a 24% reduction of fuel consumption and cut CO2 emissions by 24000t. Adopting high efficiency gas engine and chiller helps raise COP in this DHC. This large saving of energy and CO2 emission reduction has come as the result of the “best mix” of optimum layout and design of high efficiency equipment such as gas engines generating power, and optimum operation technology.
*Comparison with the Makuhari DHC Center before introduction of the new system in 2007. 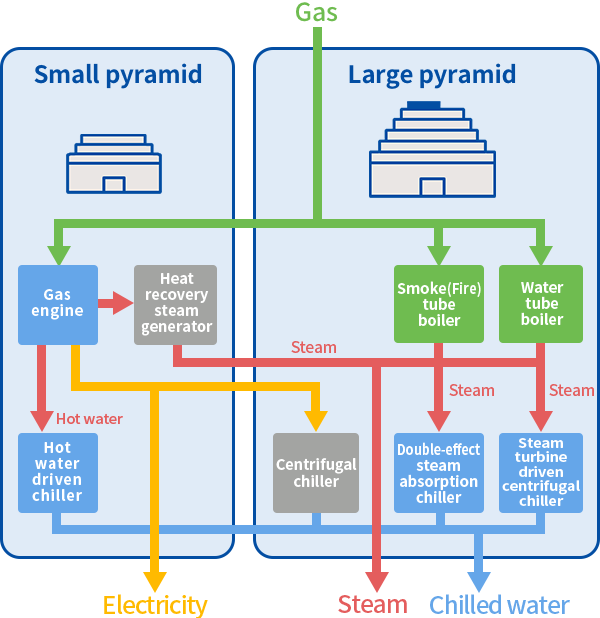 Tamachi smart energy park is the first new urban redevelopment project. Since 2014, the project has linked three disaster-response facilities in the northern district adjacent to Tamachi Station - public facility, hospital and a childcare support facility – to each other and to a central smart energy center with heat, electricity, and information networks. TGES plans to build a second smart energy center for the new center in the adjacent area to be operated in tandem with the first as the district undergoes further development. This project will create a multipurpose business center on land owned by the company. 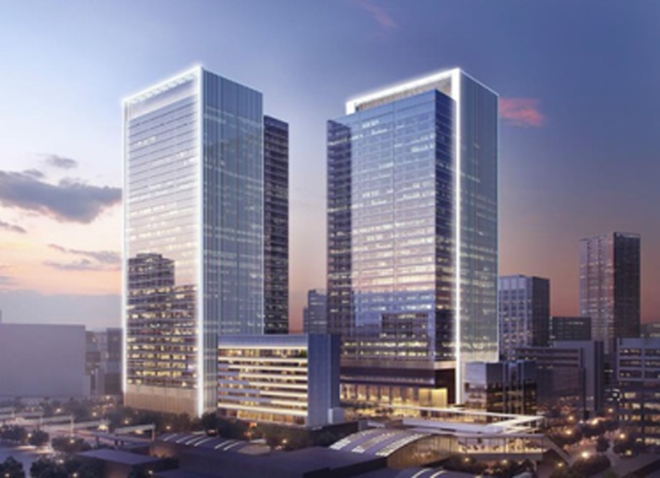 Since the area around Tamachi Station is positioned as a Priority City/Residential Environment Improvement Area and expected to be pushed forward with community development, TGES introduced the smart energy network project. Smart energy communities can be made "energy smart" by building smart energy networks (SENs), which link supply and demand in a community into a single heat and power network based around a gas cogeneration system.
Energy supply and demand throughout the network are optimized by an energy center, which precisely manages the network's heat and power use. Making waste-free use of heat and electricity at the community level in this way serves to raise energy efficiency in the community as a whole, allows business activities and everyday life to be sustained in the event of a power outage, and enhances cities' value. 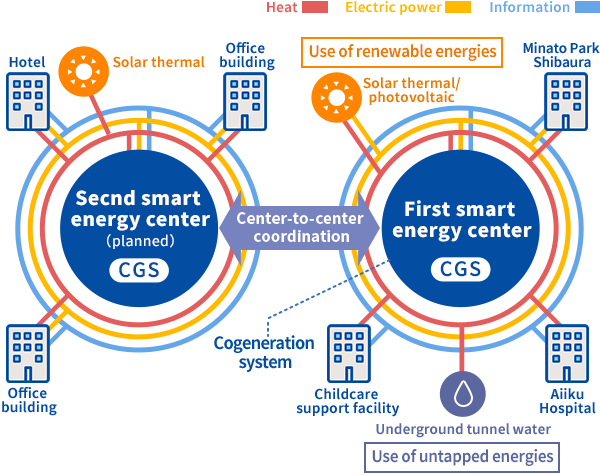